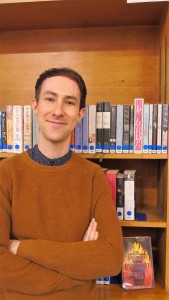 Turning the Hourglass: The Journey of a Novel

I always find that some of the most exciting stories are often the simplest ones: little ideas that are so odd or eerie or mysterious that I can’t stop thinking about them for days after. Those are the kind of ideas I try to grab onto for my own writing, and it’s one of those that pushed me to commit to writing my first novel almost six years ago.

I’m not sure what sparked the concept but at some point I thought about ghosts and what people are really seeing when they say they’ve witnessed one. I even think I’ve had some spooky encounters myself, but I wondered what made us assume they were the spirits of people who’d died. Why do ghosts have to be from the past? Instead, I considered – what if ghosts are from the future? Backwards echoes, not from people who’ve died, but from people who haven’t lived yet.

I latched onto the idea and kept returning to it, and ultimately I decided this is what I should write about. I hadn’t written creatively since I was in high school, but I vividly remember sitting on my saggy couch in my old flat late at night and promising myself that I’d take my ghosts from the future and write a novel – a dream I’d always had.

Of course, I knew that that small seed of an idea wasn’t enough to merit a whole book. I had to cultivate it with characters and setting and plot and encourage it to grow over time. For the next several weeks, my laptop became my new best friend and I eked out further details: maybe the future ghosts are actively ‘visiting’ us for a reason; maybe they’re studying us; perhaps if you’re being ‘visited’ then you must be important in some way in the future; and perhaps these future researchers have lost other traditional historical records.

The world in my head and on my planning pages sprouted into New London, a post-nuclear war city in the 23rd Century, and the ‘ghost’ at the centre of it all became Dyrne Samson: a historian who realises that being spotted as a spectre in the past could be useful…

Incorporating an idea for a short story I’d had around the same time, I decided that Dyrne should be a former university History lecturer. He witnesses some students mistreating a young man, but fails to act, pretending he hasn’t heard their cruel words. However, his poor judgement ends with horrendous consequences, and the guilt surrounding these events never leaves him.

The storyline I was constructing also contained thematic elements I’ve always been interested in: secrecy, guilt, mysticism, and prejudice (concerns I always seem to return to in my writing). And I definitely share traits with Dyrne, although I’d like to think I wouldn’t make some of the choices he does.

From these beginnings, Turning the Hourglass slowly – very slowly – took shape. Officially I have seven full draft versions of the novel prior to what is now published, but really there were innumerable rounds of edits, changes, restructures, tantrums, and frustrations before the novel came to be what it is. In retrospect, diving into my first novel with no real training or practise in short story writing was a bit of a mad decision! However, it was also an invaluable learning journey. I’ve made several wonderful connections with other writers online who’ve helped me along the way and have soaked up endless pieces of advice and nuggets of writing wisdom through blogs, forums, emails and beta-reads. I am a far better writer now because of my Hourglass experience – all six years of it. And all of that finally culminated in a publishing deal with Black Rose Writing – an indie publisher I submitted to in early 2018. The reply from them a couple of months later, asking if the book was still available for publication, was – and still is – the most exciting email I’ve ever been sent!

So my ‘simple idea’ isn’t so simple anymore, but I’m really proud of what’s bloomed from it and from that late night in the old flat on my saggy couch. Maybe I’ll get to go back and ‘visit’ it years from now, and give myself a thumbs up.

Historian Dyrne Samson doesn’t want to read about the past anymore. Now he can visit it. Abandoning University lecturing, he joins a classified organisation, hidden beneath the streets of New London. Their time-distortion pods let him witness any historical event he chooses. Almost. Visiting his own timeline is forbidden – the only reason he can’t return to the day he’ll never forget.

Matthew is a writer and teacher from Central Scotland and his debut novel, Turning the Hourglass, is due for publication in April 2019 with Black Rose Writing. Matthew has also had short fiction and poetry published by Centum Press, Medusa’s Laugh Press, Mother’s Milk Books, Ink & Voices, and Havok magazine. In addition, he is a contributing arts review writer for award-winning magazine The Wee Review as well as the Neon Books blog.

Buy links for Turning the Hourglass:

One thought on “Turning the Hourglass: The Journey of a Novel By M.J. Keeley”