For The Love of Dogs

WHEN I WAS A CHILD my absolute favourite TV show was Get Smart.  It had it all:  bumbling bad guys, shoes phones, secret agents hiding in pot plants and rubbish bins, and my favourite of all, a dog called Fang, a.k.a. Agent K-13.  Fang was Maxwell Smart’s best friend in spy school, although as a Control agent he didn’t have much to do other than bury stuff and look adorable.  That was enough for me, though.

Years later and the idea of having a dog began to germinate so I began scanning websites for rescue pets.  I found him almost immediately, a little white dog with big brown eyes, looking a little sad to be honest.  They’d named him Gucci at the shelter because, as the beautiful people they were, they named every dog that came through the doors since most were strays and had never had an identity before.  Well, I’d already thought of what I’d call him and figured he wouldn’t mind – a new name for a new home and all that.  Enter Larrabee. (yes, another secret agent!)

We bonded from the get-go.  It was like he knew he’d been given a second chance, and was determined to make every minute count.  That first night he nudged the bedroom door open with his nose and jumped onto the bed, making a spot for himself in the crook of my arm.  I had to move him to a mat in the bathroom because he hadn’t had a bath yet and was a little whiffy.  There followed a few weeks of adjustment.  You see, he’d been abused by a previous owner – or that’s what they suspected at the shelter – so he was terrified of men and would bark at them, or hide until tables, chairs, wherever he felt safe.  Other dogs, mostly the big ones, made him nervous too.  He’d most likely been stuck in a yard his whole life, so never knew what was beyond the gate.  It was all new and scary.  We went through it together, this learning to trust.  First it was my brother, then my dad, just sitting next to him on the couch, a treat in hand.  Then other people.  Slowly, I watched him come alive.  We went to the beach and the park.  I threw balls and sticks – he went after them but never brought them back!  We ran up and down the hallway, did laps around the outside of the house – going in opposite directions – and slept on the couch together, one at each end.  He became, as Edith Wharton put it so beautifully, “A heartbeat at my feet.”  I was broken-hearted, vulnerable, and it was like he knew.  “We’ll get through this together,” his sparkling brown eyes seemed to say. 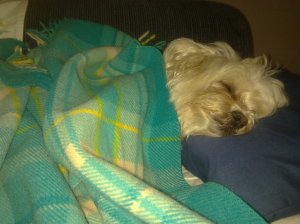 Every day was a new beginning for him, one full of excitement and possibility.  There were other dogs to play with, and little cubes of cheese to find in my pockets, there were afternoon naps and TV to watch, loads of cuddles and, at the end of the day, his own pillow and blanket.  He was only with me for a year but I saw in his waggly tail and his lolling tongue, in his big doggy grin, that it was the best year of his life – the good had cancelled out all the bad which came before.  I miss him so much.  Sometimes when I see his photos – and they are all over the house – I feel my heart catch, even after all this time.  But it was wonderful while it lasted.  He healed my broken heart and I healed his.  He was my best friend and I’ll love him forever.  There will be other dogs, in time, but there will only ever be one Larrabee, and I’ll keep forever the memory of my secret agent dog.

Samantha Wood was born in Victoria in 1971.  Her first book, the memoir, Culua: My Other Life in Mexico was published in 2003 after extended visits to Mexico, and was essentially a love letter to her mother’s country.

Samantha graduated from Monash University in 2005 with a Master’s degree in Translation Studies (Spanish) focusing on the translations of Gabriel Garcia Marquez’s little-known children’s stories where angels crash landed in chicken coops and the world’s handsomest man washed ashore.  It was this love of the magic of language and words that inspired the story for her first novel, The Bay of Shadows.

In 2007, she joined Ai-Media, a world-leading broadcast captioning service that provides access for the Deaf and hard of hearing.  She lives in Melbourne, Australia.