In a Society obsessed with perfection, being different is a crime’

Thanks so much for inviting me on your blog to talk about my new YA, PERFECT SUMMER. The tag line is ‘In a Society obsessed with perfection, being different is a crime’, and the theme of the book is whether society’s obsession with perfection could eventually lead to people who don’t conform to the ‘norm’, who are slightly different in any way or have disabilities, are looked down upon and locked away. Or worse.

I’ve been concerned for a long time about our current society’s obsession with perfection, how pictures of models in magazines are photoshopped, how the media pushes the idea of having perfect looks and a perfect body, and the pressures this puts on people, especially women and in particular young girls. A few years ago I read an article about girls as young as four and five being upset that they were too fat or too ugly and that really worried me. I started to wonder how far this obsession with perfection would go.

Another concern of mine is how people with disabilities are treated in society, and are often marginalised. Both these concerns formed the seeds of PERFECT SUMMER.

The title PERFECT SUMMER can be deceptive, as some people think that a) the story is about a perfect summer the protagonist experiences, or b) the story is about the life of a character called Summer who is perfect. It sounds a light, fluffy story, when actually it’s a gritty plot that deals with serious issues. The story itself is set about thirty years in the future, in a time when society has become so obsessed with physical perfection that the Ministry (government) give people grants for body enhancement (plastic surgery) and many clubs only allow entry to the most beautiful people.  People with disabilities are called RADS and sent to live in Residential Learning Centres(RLCs) out of the public eye.

I chose the title because Morgan has a friend called Summer who seems to have a perfect life, she is beautiful, rich, has trendy parents who mix with celebs and wants for nothing and Morgan can’t help envying her. Whereas Morgan, the protagonist, isn’t so beautiful or rich and her three-year-old brother, Josh, has Down’s syndrome, which causes the family a lot of grief as Morgan’s parents refuse to put him a RLC. Then Josh is kidnapped and the authorities aren’t interested. Morgan and Summer, along with another teenager, Jamie, whose sister Holly has also been kidnapped uncover a sinister plot involving the kidnapping of children with disabilities and put themselves in terrible danger. Can they find Josh and Holly before it’s too late. By the end of the story we discover that Summer’s life isn’t as perfect as it seems, but I’m saying no more as I don’t want to give away the plot.

I was a lucky enough to get an Arts Council grant to allow me time to write the first version of PERFECT SUMMER which was published in the U.S by Astraea Press. I’ve now revised the book, and Accent Press have republished it with a brilliant new cover. 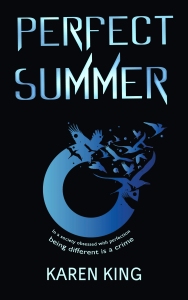 Summer and I hurried upstairs while Josh was busy watching TV. Summer plonked herself down on my bed while I got my things ready.

“Want some music?” I asked, pressing the silver button on the comm-panel. The latest hit from Krescendo, our favourite band, blasted out and a hologram of them playing beamed onto the wall.

Then I pressed the green button, my wardrobe doors glided open, and a rail of clothes slid out. I glanced over at Summer, feeling awkward as always, that my room was so small and my wardrobe so sparse. Summer’s wardrobe was a huge walk-in affair full of designer clothes. Luckily, she was sprawled out watching Krescendo so I quickly grabbed the clothes I needed for the weekend and shoved them in my rucksack. Thank goodness I’d found an immaculate emerald green Maliko dress at the recycle store the other week. That would be perfect for Roxy’s. I knew Summer would let me borrow her clothes but felt better if I wore something of my own.

I took out the dress and zipped it into a freshpack to keep it crease-free. I glanced at the image screen on my bedroom wall and grimaced. My make-up needed renewing and some strands of my chestnut hair were escaping from the ponytail I’d swept it into. I swiftly fixed it and applied more make-up. I didn’t want to turn up at Summer’s looking a mess, Tamara and Leo expected everyone to always look their best.

“Ready.” I pressed the buttons on the CP again to close my wardrobe doors, and switched off the music.

“Have a nice weekend,” Mum said as we popped in to say goodbye. She looked so pale, with dark circles under her eyes. I could tell the visit from the Ministry had upset her and hesitated for a moment, wondering if I should stay. But Dad was due home soon and I was so looking forward to the weekend. I loved going to Summer’s house and being spoilt for a bit. It was like living in another world. She was so lucky.

“Thanks, we will.” I leaned over and tousled Josh’s chestnut curls. “Bye, Josh.”

“Maw going out now. I’ll play with you when I come back.”  He puckered his face as if he was going to cry, but Mum took his hand. “Come on, Josh, let’s pick some tomatoes for tea.”

Josh’s face lit up. He loved helping Mum in the garden. Everyone had a vegetable patch, compost and water butt by order of the Ministry as part of the Planet Protection Programme. I hated gardening but Josh loved helping Mum water the plants with the rainwater collected in the butt, and picking the vegetables. Summer’s parents had a gardener, of course.

Mum led Josh out into the garden while we went out the front door.  before Josh could realise I was leaving. I had no idea how much I was going to regret not playing with Josh one more time. Or not kissing him goodbye.

What people are saying about Perfect Summer

‘This book was amazing, as it was easy to relate to the characters, and it put a perfect twist on society’s obsession with perfection.’ Shehayamsani – Litpick reviewer.

‘King does an amazing job of writing about the discrimination children with disabilities face’  http://strollinginstoryland.blogspot.co.uk/

I was really taken away by this book – it is full of excitement, danger, shocks, gripping scenes and a thick plot. It is a truly brilliant story, with some fun – but SO realistic – characters. It makes the reader think – could the future turn out to be something like this?? Bookworm1, Amazon UK review

‘The story line was fascinating and kept my attention. Could also be a good book club discussion book.’ Donna – More Than A Review

PERFECT SUMMER is available now. You can download it here: http://amzn.to/2mMXTz 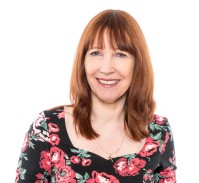 Karen King is the author of over 120 children’s books and has had two YA’s published, Perfect Summer and Sapphire Blue. Perfect Summer was runner up in the Red Telephone Books YA novel competition in 2011 and has just been republished by Accent Press.

Karen is also the author of two romance novels, and has been contracted for three chick lit novels by Accent Press. The first, I do?… or do I? was published in 2016 and the second, The Cornish Hotel by the Sea, is due out in the Summer. In addition, Karen has written several short stories for women’s magazine and worked for many years on children’s magazines such as Thomas the Tank Engine and Winnie the Pooh as well as the iconic Jackie magazine.

When she isn’t writing, Karen likes travelling, watching the ‘soaps’ and reading. Give her a good book and a box of chocolates and she thinks she’s in Heaven.

Thank you for hosting me!

2 thoughts on “Perfect Summer by Karen King’In a Society obsessed with perfection, being different is a crime’”