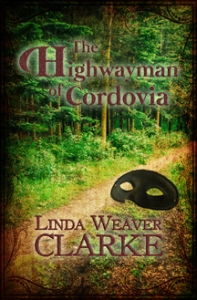 The Highwayman of Cordovia (The Rebels Series Book 2)

I really enjoyed The Highwayman of Cordovia, it’s a great addition in The Rebels Series. I loved following Christine and Austin throughout this story. Christine is a very brave strong woman who has strong believes,  as she rekindled her friendship with the impish  but kind-hearted Austin I couldn’t help but want to read on and find out if there was more than just friendship between them.

The story itself is about men and women who make up a rebel  group, they get together to stop a powerful man who want to become king and rule over Cordovia, as they come up with a plan to stop the man from becoming king and destroying the lives of the people who reside in Cordovia.  Austin begins falling deeper and deeper in love with Christine, however he has a secret of his own that is holding him back from letting himself express the feelings in his heart. Will they be able to save Cordovia from a potential power-hungry king? Will Christine and Austin confess their feeling for each other? Read this book to find out,

I also loved that we meet some old faces from the first book in The Highwayman of Cordovia and get to see just how their lives have changed from where the first one ended. Linda Weaver Clarke  does a great job at creating strong independent female characters and scenes that are easy to imagine.

If you like books were good try to tip the balance over the wrong dong of others and woman can stand their own ground in any disagreement. You’ll love this book. I highly recommend this story.

Link:  The Highwayman of Cordovia (The Rebels Series Book 2)

2 thoughts on “My Review: The Highwayman of Cordovia (The Rebels Series Book 2)”