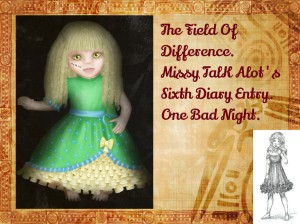 Diary  last night was the worst, while me and Fumble walked back to the dropping point I came up with a plan that would beat all plans so far. Fumble’s silver body shone in the moonlight and his interface flashed strangely as we arrived. I pointed to the tallest tree where once it was rumoured a small fluffy creature climbed the top and from there he saw the world beyond this place. After I told Fumble this twice, until he understood he was to stay at the bottom and keep watch. He moaned something about not wanting to be left alone out here.

We made our way slowly towards the tree looking left and right for any stray dolls out looking for parts. Before I reached for the lowest branch and swung like an unbalanced monkey until I could steady myself and move to the next one. The higher I got the smaller Fumble looked, like a little misshapen toy lost in a huge land. Then it happened two huge red eyes met mine, a beak poked me making me hold on tighter to the branch above.

“You go back!” he hooted before he started flapping his wings making the tree shake until my grip loosened and I tumbled hitting my body on different branches on the way back down. Until finally I landed with a crash on top of Fumble.

If that wasn’t enough the half-breed I’d been tracking turned up in front of me, his old hand snatched me away from Fumble gripping the back of my neck, as he held me up like a prize find. He started to hobble back towards where those dolls wait. Fumble followed repeating. “Flesh being we don’t hurt others, we don’t hurt others.”

What happened next, happened so fast I’m still not sure how I feel. He stopped and threw me inside that slime. I fell deeper and deeper. Hands grabbed at my legs and arms pulling me closer and closer towards the bottom. Teeth nibbled on many different parts of my body ripping my dress a little more as some whispered with excitement. Suddenly the whispering stopped and I was back beside my diary soaking wet with a bitter taste in my mouth.

Fumble had told me that Wally had fished me out, but he has been acting strange, like something has changed, something he won’t share. He told me to-night he will be going to the drop off point alone and I should stay hidden and rest. Something’s changed and I don’t like it one bit.

I best go before Fumble does go without me. No one leaves me behind. I’ll get what he’s hiding out of him before we get there.